Skip to content
Like in most classroom these days, in my classroom I have students of varying needs and abilities. This means that I need to plan my lessons and find ways to motivate and engage everyone, as well as reach the greatest number of students, in order to have the majority of my students understand the concepts being taught.
There are many ways of doing this, such as by playing games, by role playing and by providing manipulatives to students. By providing concrete examples, students are more likely to remember the lessons because they will have learned them through visual (eyes), auditory (ears) and kinesthetic (through motion or touch) experiences. Even if students don’t understand everything, they are more likely to get the gist of it and catch on during follow-up lessons and activities.
An example of an activity I did involving this type of learning was when my fourth grade class was learning about the Cartesian plane.
I started by using the tiles on my floor to create a gigantic Cartesian plane. I used circular stickers by Avery to mark the coordinates on the plane and Post-its to identify the vertical and horizontal axes. 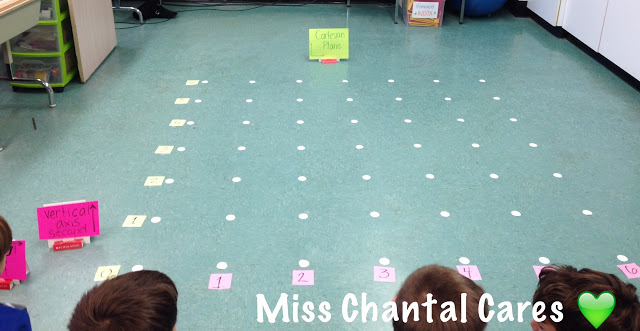 We talked about maps and how we use them to find destinations.
We then compared the Cartesian plane to a Battleship board game, where players must sink battleships that are on hidden coordinates. We looked at how the vertical axis on a Cartesian plane is identified with numbers rather than letters. We discussed how in the Cartesian plane there are zeros, while in Battleship there aren’t any.
We then moved on to talk about another difference between Battleship and Cartesian planes. When we give coordinates in Battleship, it doesn’t matter which order you say the letter or number in, because there is only one row or column labelled C, for example, and one column or row labelled 2. However, the Cartesian plane can be tricky because you need to know the order in which to read the ordered pair describing coordinates.
I needed to provide visual cues and reminders to my students. I used some Scholastic book display boards and stuck some signs onto them to make them visible to all students.

The next step was to provide ordered pairs on construction paper strips to my students, so that they could work with partners and figure out where to plot their points. 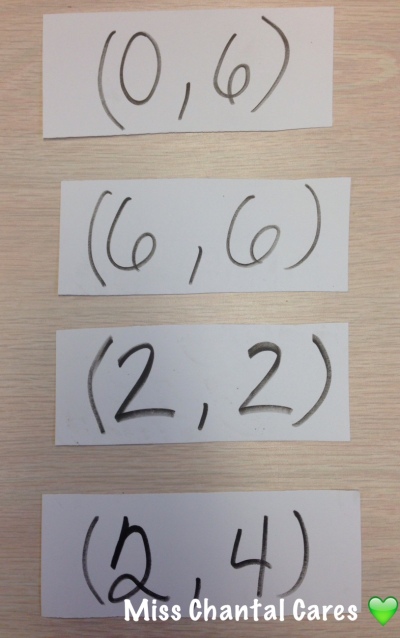 Once their points were plotted, we checked with the entire group to see if they were plotted correctly. We discussed which were correct and why, and figured out why the incorrectly plotted points were in the wrong position and made adjustments to plot them correctly.

I made sure that every students had a turn plotting points on the Cartesian plane before trying to translate what they’d learned to apply it to a 2-dimensional example within their workbooks. More than 90% of my students were able to complete the tasks on their own, without further explanation, because we has explored Cartesian planes in a concrete, hands-on way, while making connections to their prior experiences.
If you have used similar means to teach math concepts with your students, please share them in the comment section below, or on my Facebook page, by clicking here.
Until my next blog post, don’t forget to be the change.
Chantal